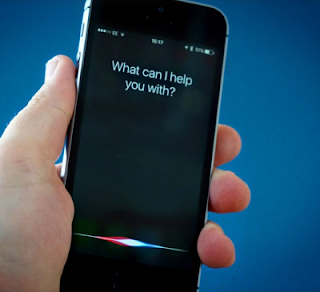 I'm comparing some of the AI personal assistants and their smart speakers. SIRI has been around since 2011 for Apple users; you can use SIRI on the iPhone, iWatch, iPad, et al. I don't use most Apple products, so I've never used SIRI, but there have been many jokes online, and on TV, about SIRI, for a long time (especially with regards to her getting things wrong). I assume that SIRI has improved in the past 8 years. However, there are still complaints about her accuracy. Video 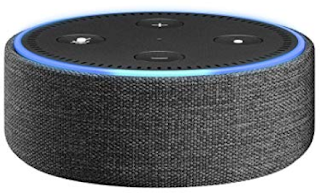 When I first heard about Alexa and the Amazon Echo, I didn't really understand the appeal. I scoffed, "If I want to look up some information, I can just do that on my phone or computer. I'm not so lazy that I need to ask Alexa to do that."  However, this past Christmas, I decided to get a cheap one (the Echo Dot, which looks like a hockey puck) as a stocking stuffer for my husband. It was on sale, and I figured it would be amusing, at the very least, and we could probably play some music on it. 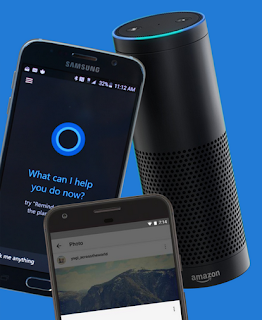 I set up the Echo Dot ahead of time, so that he could use it instantly. It required that I first download the Alexa app on my Android phone and sync to it via Bluetooth. That took me a few minutes, but it wasn't terribly difficult. Once I did that, I realized that I could use Alexa on my phone and really didn't need the Echo at all. The main advantage of the smart speaker seems to be that it has better quality sound for music you play. Also, if you have multiple speakers, you can put them in different rooms of your house. That would certainly be an advantage if you want to use Alexa in a different room (such as listening to music before bedtime). Also, if your spouse doesn't have the best hearing, you can have Alexa call him/her to dinner (or relay any kind of needed message) without having to yell or go to the other room.  Lastly, to use Alexa on my phone, I had to make sure the Alexa app was up and running, and I had to press the speaker button. There might be a way around that, though.  The Echo Dot is supposed to be plugged in and always on, unless you tell Alexa to turn it off. No need to press any button.

When we first used the Alexa, it was kind of fun. We asked it silly questions, used it to play music, and tested its accuracy in questions and searches.  Well, it's not all that accurate, and it does play a lot of songs, for the most part (2 million if you have Amazon Prime, or 40 million if you sign up for Amazon Unlimited). However, when we tried to find more obscure older songs on the Amazon Prime Music, we could only find a few.  I don't want to have to pay for the Amazon Unlimited Music, although it would certainly be worth it if you used Alexa a lot.

The worst part about Alexa is that you can't search Google for answers, and Alexa doesn't have nearly as much knowledge as Google.  You see, Google has Google Assistant.  The different companies don't share. I guess Alexa has its own knowledge base, but it's not as good. That was disappointing. 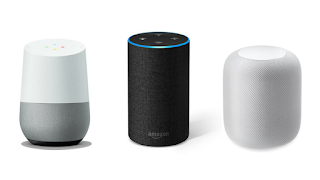 What I found most useful about Alexa was that I could tell it to add items to my grocery list, or to my Amazon shopping cart. It has access to all of my digital books and could read them to me (I didn't try that feature out). I'm not sure if I could print from there, but at least I could probably email or text myself the grocery list. Or, I could find the list on Amazon from my computer and then print it. I think this is very handy.  The most useful features require more money, though. That is, if you want Alexa to turn your lights on and off, or change your thermostat, you have to buy other equipment for that. I would really love to do that. I don't NEED to do it, though. Alexa is a fun toy, and pretty useful, but it's not life-changing. Video

We sent the Alexa back because we started reading about problems it has with privacy.  Also, when we asked Alexa straight out, "Do you record everything we say?" it did not give a definitive answer. Instead, it gave a corporate CYA reply that basically said, "I only send information back to Amazon when you wake me up." So, it sends everything we say if Alexa is working...assuming she recognized the wake word properly.  That was not reassuring at all! Now, personally, I'm not a very private person. I put practically everything about my life in my blogs, on social media, and on my website. My husband is a bit more private than I am, though, so he didn't like the risks with Alexa.  Fortunately, Amazon is very good about returns, so that wasn't a problem.

I do still have the Alexa app on my phone, though, and I may continue to use it. If I did use an external speaker for Alexa, I would probably order a speaker with better quality sound for playing music.  I wish that Alexa would be a little more useful on my phone, though. For instance, you can't tell Alexa to open another app, such as Chrome or Facebook. I had trouble when sending a text or email. For example, I had trouble texting to my SIL Eileen, whom I text quite often. She's in my contacts twice because she has two different smart phones (one that her husband uses).  When I asked Alexa to send her a text, it would always ask me which number I wanted to text to (even though I mostly only use the one). It should learn easier than that. I should be able to say, "send a text to the last Eileen I texted". Although Alexa supposedly tries to learn your speech, we often had to repeat our requests.  At one point, when a song was being played, we had to repeat the "stop" command quite a bit before it finally stopped playing the song.

I've rarely used Google Assistant on my phone, but with the Android you CAN dictate, and it will type what you say in a note or email, which can be very useful. All of the virtual assistants can do that, to varying degrees. The few times I tried to ask it something, it only understood me about 50% of the time. However, I will say that it works best if there is no background noise. From visiting their website, I can tell that Google Assistant works similarly to SIRI and Alexa in most ways. You can hook it up with additional equipment to have it turn your lights or thermostat off and on. Video 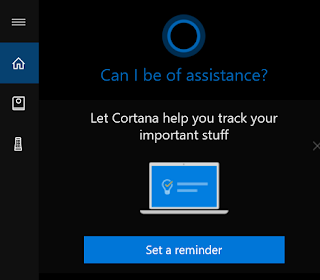 After trying out Alexa, I realized, "Hey, I've had an AI personal assistant all long - Cortana on Windows!"  I usually find the Cortana search box annoying, so I turned it off entirely. However, I turned it back on again, to test it and see if I liked it as an AI. Of course, it will have the same privacy risks as Alexa, but it's also a lot easier to turn off. From what I can tell, its accuracy was not all that great. For instance, when I try to look myself or my husband up on the search (it uses Bing, being a Microsoft product), it never spelled or pronounced our last name correctly. There should be a way to correct it in those cases. Cortana is most helpful for opening programs or for looking up things on Bing (but you will need to type it if the words you're using have an unusual spelling).  Now, all of these AI's do have a beginning training session, where it's supposed to learn your voice, but I found Alexa much easier to train than Cortana. 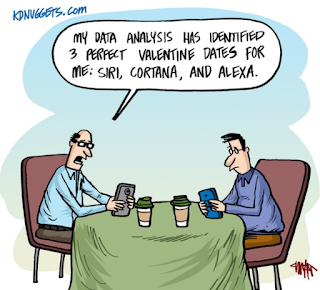 One helpful thing about Cortana is that you don't have to have your sound turned on for it to work (as long as your microphone is on). You can also just type your query in the search bar.  Just like Alexa, Cortana can't type what you dictate into Word or some other program (you would need another program, such as Dragon Naturally Speaking, for that). However, it can do a lot to help you operate your computer or other device hands-free, such as opening programs, searching on Bing, turning your WiFi off and on, making an appointment, making a phone call (if you have a Windows phone), etc. It seems to have more functions than Alexa on my phone. Video

There's one more useful thing I observed about Cortana.  If you use particular browser add-ons, you can adjust Cortana so that it will open Google (or your preferred search engine) in Firefox or Chrome, instead of Bing in Internet Explorer.  This makes Cortana a lot more valuable to those of us who prefer other web browsers and search engines.

Unfortunately, not one of these devices will play the music that I have on my iTunes, on my computer. I'd probably need SIRI for that, and it would probably only play the ones on the cloud, plus your songs from Apple Music (if you subscribe). It might be possible to pair the new Google Home with iTunes, though.

If you want to just use ONE AI personal assistant...Well, it will probably depend on which type of phone, tablet or computer you have. If you can choose, I would suggest Cortana, even though it is a little tougher to set up and doesn't always understand how to spell names. If you're a Windows user, you already have it. Video 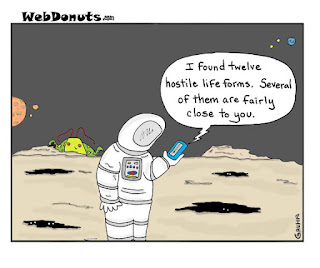 Update 4/19: I just received this email from Google: To thank you for being a valued 2 TB Google One member, we're giving you a Google Home Mini at no charge. We'll even cover shipping. Play music, get answers, and more just by saying "Hey Google."  They had me at "no charge." I can't resist free stuff! I'm going to have to try it out... 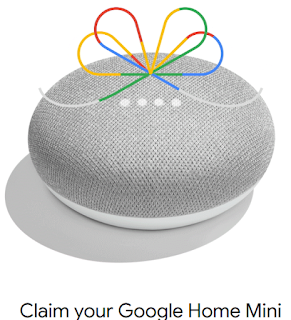 Posted by Suzanne Lanoue at 2:24 PM